This document describes MTProto v1.0, its status is DEPRECATED.
For information on encryption used in up-to-date Telegram clients, kindly see this document.

The protocol is designed for access to a server API from applications running on mobile devices. It must be emphasized that a web browser is not such an application.

The protocol is subdivided into three virtually independent components: 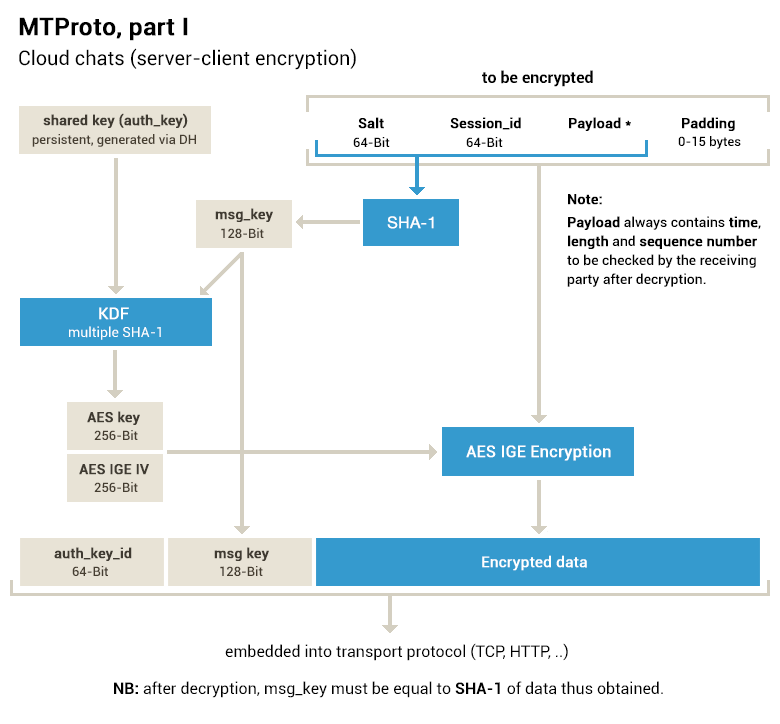 See additional comments on our use of IGE, SHA-1 and message authentication.

Several connections to a server may be open; messages may be sent in either direction through any of the connections (a response to a query is not necessarily returned through the same connection that carried the original query, although most often, that is the case; however, in no case can a message be returned through a connection belonging to a different session). When the UDP protocol is used, a response might be returned by a different IP address than the one to which the query had been sent.

There are several types of messages:

From the standpoint of lower level protocols, a message is a binary data stream aligned along a 4 or 16-byte boundary. The first several fields in the message are fixed and are used by the cryptographic/authorization system.

Each message, either individual or inside a container, consists of a message identifier (64 bits, see below), a message sequence number within a session (32 bits), the length (of the message body in bytes; 32 bits), and a body (any size which is a multiple of 4 bytes). In addition, when a container or a single message is sent, an internal header is added at the top (see below), then the entire message is encrypted, and an external header is placed at the top of the message (a 64-bit key identifier and a 128-bit message key).

All numbers are written as little endian. However, very large numbers (2048-bit) used in RSA and DH are written in the big endian format because that is what the OpenSSL library does.

Prior to a message (or a multipart message) being transmitted over a network using a transport protocol, it is encrypted in a certain way, and an external header is added at the top of the message which is: a 64-bit key identifier (that uniquely identifies an authorization key for the server as well as the user) and a 128-bit message key. A user key together with the message key defines an actual 256-bit key which is what encrypts the message using AES-256 encryption. Note that the initial part of the message to be encrypted contains variable data (session, message ID, sequence number, server salt) that obviously influences the message key (and thus the AES key and iv). The message key is defined as the 128 lower-order bits of the SHA1 of the message body (including session, message ID, etc.). Multipart messages are encrypted as a single message.

For a technical specification, see Mobile Protocol: Detailed Description
The first thing a client application must do is create an authorization key which is normally generated when it is first run and almost never changes.

The protocol’s principal drawback is that an intruder passively intercepting messages and then somehow appropriating the authorization key (for example, by stealing a device) will be able to decrypt all the intercepted messages post factum. This probably is not too much of a problem (by stealing a device, one could also gain access to all the information cached on the device without decrypting anything); however, the following steps could be taken to overcome this weakness:

If client time diverges widely from server time, a server may start ignoring client messages, or vice versa, because of an invalid message identifier (which is closely related to creation time). Under these circumstances, the server will send the client a special message containing the correct time and a certain 128-bit salt (either explicitly provided by the client in a special RPC synchronization request or equal to the key of the latest message received from the client during the current session). This message could be the first one in a container that includes other messages (if the time discrepancy is significant but does not as yet result in the client’s messages being ignored).

Having received such a message or a container holding it, the client first performs a time synchronization (in effect, simply storing the difference between the server’s time and its own to be able to compute the “correct” time in the future) and then verifies that the message identifiers for correctness.

Where a correction has been neglected, the client will have to generate a new session to assure the monotonicity of message identifiers.

Enables the delivery of encrypted containers together with the external header (hereinafter, Payload) from client to server and back. There are three types of transport:

We shall examine the first two types.

Implemented over HTTP/1.1 (with keepalive) running over the traditional TCP Port 80. HTTPS is not used; the above encryption method is used instead.

An HTTP connection is attached to a session (or rather, to session + key identifier) specified in the most recent user query received; normally, the session is the same in all queries, but crafty HTTP proxies may corrupt that. A server may not return a message into an HTTP connection unless it belongs to the same session, and unless it is the server’s turn (an HTTP request had been received from the client to which a response has not been sent yet).

The overall arrangement is as follows. The client opens one or more keepalive HTTP connections to the server. If one or more messages need to be sent, they are made into a payload which is followed by a POST request to the URL/api to which the payload is transmitted as data. In addition, Content-Length, Keepalive, and Host are valid HTTP headers.

Having received the query, the server may either wait a little while (if the query requires a response following a short timeout) or immediately return a dummy response (only acknowledging the receipt of the container). In any case, the response may contain any number of messages. The server may at the same time send out any other messages it might be holding for the session.

In addition, there exists a special long poll RPC query (valid for HTTP connections only) which transmits maximum timeout T. If the server has messages for the session, they are returned immediately; otherwise, a wait state is entered until such time as the server has a message for the client or T seconds have elapsed. If no events occur in the span of T seconds, a dummy response is returned (special message).

If a server needs to send a message to a client, it checks for an HTTP connection that belongs to the required session and is in the “answering an HTTP request” state (including long poll) whereupon the message is added to the response container for the connection and sent to the user. In a typical case, there is some additional wait time (50 milliseconds) against the eventuality that the server will soon have more messages for the session.

If no suitable HTTP connection is available, the messages are placed in the current session’s send queue. However, they find their way there anyway until receipt is explicitly or indirectly confirmed by the client. For the HTTP protocol, sending the next query into the same HTTP connection is regarded as an implicit acknowledgment (not any more, the HTTP protocol also requires that explicit acknowledgments be sent); in other cases, the client must return an explicit acknowledgment within a reasonable time (it can be added to a container for the following request).

Important: if the acknowledgment fails to arrive on time, the message can be resent (possibly, in a different container). The parties must autonomously be ready for this and must store the identifiers of the most recent messages received (and ignore such duplicates rather than repeat actions). In order not to have the identifiers stored forever, there exist special garbage collection messages that take advantage of message identifier monotonicity.

If the send queue overflows or if messages stay in the queue for over 10 minutes, the server forgets them (or sends them to swap, no genius required). This may happen even faster, if the server is running out of buffer space (for example, because of serious network issues resulting in a large number of connections becoming severed).

This is very similar to the HTTP transport. May also be implemented over Port 80 (to penetrate all firewalls) and even use the same server IP addresses. In this situation, the server understands whether HTTP or TCP protocol must be used for the connection, based on the first four incoming bytes (for HTTP, it is POST).

When a TCP connection is created, it is assigned to the session (and the authorization key) transmitted in the first user message, and subsequently used exclusively for this session (multiplexing arrangements are not allowed).

If a payload (packet) needs to be transmitted from server to client or from client to server, it is encapsulated as follows: 4 length bytes are added at the front (to include the length, the sequence number, and CRC32; always divisible by 4) and 4 bytes with the packet sequence number within this TCP connection (the first packet sent is numbered 0, the next one 1, etc.), and 4 CRC32 bytes at the end (length, sequence number, and payload together).

There is an abridged version of the same protocol: if the client sends 0xef as the first byte (important: only prior to the very first data packet), then packet length is encoded by a single byte (0x01..0x7e = data length divided by 4; or 0x7f followed by 3 length bytes (little endian) divided by 4) followed by the data themselves (sequence number and CRC32 not added). In this case, server responses look the same (the server does not send 0xefas the first byte).

In case 4-byte data alignment is needed, an intermediate version of the original protocol may be used: if the client sends 0xeeeeeeee as the first int (four bytes), then packet length is encoded always by four bytes as in the original version, but the sequence number and CRC32 are omitted, thus decreasing total packet size by 8 bytes.

The full, the intermediate and the abridged versions of the protocol have support for quick acknowledgment. In this case, the client sets the highest-order length bit in the query packet, and the server responds with a special 4 bytes as a separate packet. They are the 32 higher-order SHA1 bits of the encrypted portion of the packet with the most significant bit set to make clear that this is not the length of a regular server response packet; if the abridged version is used, bswap is applied to these four bytes.

There are no implicit acknowledgments for the TCP transport: all messages must be acknowledged explicitly. Most frequently, acknowledgments are placed in a container with the next query or response if it is transmitted in short order. For example, this is almost always the case for client messages containing RPC queries: the acknowledgment normally arrives with the RPC response.

In the event of an error, the server may send a packet whose payload consists of 4 bytes as the error code. For example, Error Code 403 corresponds to situations where the corresponding HTTP error would have been returned by the HTTP protocol.