The Bot API is an HTTP-based interface created for developers keen on building bots for Telegram.
To learn how to create and set up a bot, please consult our Introduction to Bots »

You will find all changes to our Bot API on this page.

After the next update, only HTTPS links will be allowed in login_url inline keyboard buttons.

Note: After this update it will become impossible to forward messages from some chats. Use the fields has_protected_content in the classes Message and Chat to check this.

Note: After this update users are able to send messages on behalf of channels they own. Bots are expected to use the field sender_chat in the class Message to correctly support such messages.

Note: As previously announced, user identifiers can now have up to 52 significant bits and require a 64-bit integer or double-precision float type to be stored safely.

Service messages about non-bot users joining the chat will be soon removed from large groups. We recommend using the “chat_member” update as a replacement.

Run Your Own Bot API Server

And Last but not Least 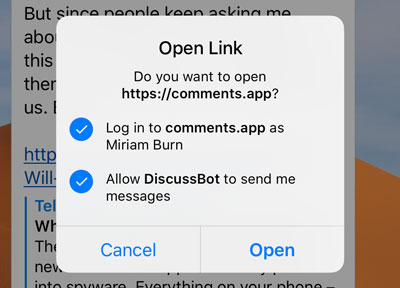 Also in this update:

Bot API 3.1. Build your own robotic police force for supergoups with these new methods for admin bots:

See Introduction to Bot Payments for a brief overview. If you're not a developer, you may like this user-friendly blog post better.

Introducing Bot API 2.3.1, a nifty little update that will give you more control over how your bot gets its updates.

Bot API 2.2. Introducing a new Gaming Platform! See this introduction for a brief overview.
If you're not a developer, you may like this user-friendly blog post better.

Introducing Bot API 2.0. Check out this page for a review of this major update.

The bot platform was officially launched.

Back to the Bot API Manual »