As of version 4.6, major Telegram clients are using MTProto 2.0.
MTProto v.1.0 is deprecated and is currently being phased out.

This article describes the basic layer of the MTProto protocol version 2.0 (Cloud chats, server-client encryption). The principal differences from version 1.0 (described here for reference) are as follows:

Before a message (or a multipart message) is transmitted over a network using a transport protocol, it is encrypted in a certain way, and an external header is added at the top of the message that consists of a 64-bit key identifier auth_key_id (that uniquely identifies an authorization key for the server as well as the user) and a 128-bit message key msg_key.

Multipart messages are encrypted as a single message. 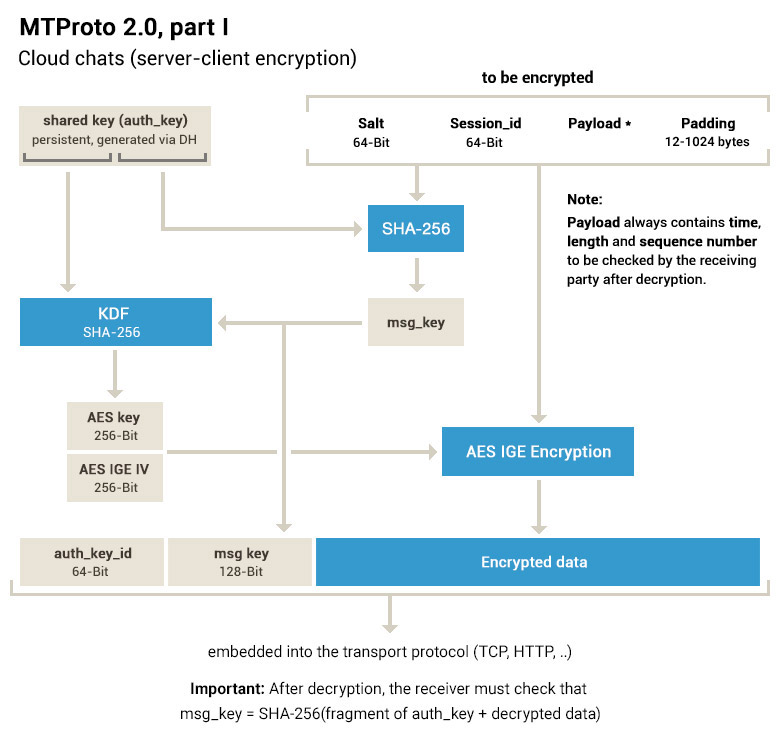 A 2048-bit key shared by the client device and the server, created upon user registration directly on the client device by exchanging Diffie-Hellman keys, and never transmitted over a network. Each authorization key is user-specific. There is nothing that prevents a user from having several keys (that correspond to “permanent sessions” on different devices), and some of these may be locked forever in the event the device is lost. See also Creating an Authorization Key.

A 2048-bit RSA key used by the server digitally to sign its own messages while registration is underway and the authorization key is being generated. The application has a built-in public server key which can be used to verify a signature but cannot be used to sign messages. A private server key is stored on the server and changed very infrequently.

A (random) 64-bit number generated by the client to distinguish between individual sessions (for example, between different instances of the application, created with the same authorization key). The session in conjunction with the key identifier corresponds to an application instance. The server can maintain session state. Under no circumstances can a message meant for one session be sent into a different session. The server may unilaterally forget any client sessions; clients should be able to handle this.

A (random) 64-bit number changed every 30 minutes (separately for each session) at the request of the server. All subsequent messages must contain the new salt (although, messages with the old salt are still accepted for a further 1800 seconds). Required to protect against replay attacks and certain tricks associated with adjusting the client clock to a moment in the distant future.

Important: to counter replay-attacks the lower 32 bits of msg_id passed by the client must not be empty and must present a fractional part of the time point when the message was created.

A 32-bit number equal to twice the number of “content-related” messages (those requiring acknowledgment, and in particular those that are not containers) created by the sender prior to this message and subsequently incremented by one if the current message is a content-related message. A container is always generated after its entire contents; therefore, its sequence number is greater than or equal to the sequence numbers of the messages contained in it.

In MTProto 2.0, the middle 128 bits of the SHA-256 hash of the message to be encrypted (including the internal header and the padding bytes for MTProto 2.0), prepended by a 32-byte fragment of the authorization key.

In MTProto 1.0, message key was defined differently, as the lower 128 bits of the SHA-1 hash of the message to be encrypted, with padding bytes excluded from the computation of the hash. Authorization key was not involved in this computation.

A header (24 bytes) added before an encrypted message or a container. Consists of the key identifier auth_key_id (64 bits) and the message key msg_key (128 bits).

The 2048-bit authorization key (auth_key) and the 128-bit message key (msg_key) are used to compute a 256-bit AES key (aes_key) and a 256-bit initialization vector (aes_iv) which are subsequently used to encrypt the part of the message to be encrypted (i. e. everything with the exception of the external header that is added later) with AES-256 in infinite garble extension (IGE) mode.

Using MTProto 2.0 instead of MTProto 1.0

A client may either use only MTProto 2.0 or only MTProto 1.0 in the same TCP connection. The server detects the protocol used by the first message received from the client, and then uses the same encryption for its messages, and expects the client to use the same encryption henceforth. We recommend using MTProto 2.0; MTProto 1.0 is deprecated and supported for backward compatibility only.

On top of this, msg_id values that belong over 30 seconds in the future or over 300 seconds in the past are to be ignored. This is especially important for the server. The client would also find this useful (to protect from a replay attack), but only if it is certain of its time (for example, if its time has been synchronized with that of the server).

It may be suggested to users concerned with security that they password protect the authorization key in approximately the same way as in ssh. This can be accomplished by prepending the value of a cryptographic hash function, such as SHA-256, of the key to the front of the key, following which the entire string is encrypted using AES in CBC mode and a key equal to the user's (text) password. When the user inputs the password, the stored protected password is decrypted and verified by checking the SHA-256 value. From the user's standpoint, this is practically the same as using an application or a website password.